You’ll find Horwood House, a stunning 1911 Grade II listed manor house down an elegant lime avenue  in the rural village of Little Horwood, close to Milton Keynes to the north and Buckingham to the west. Until recently the hotel was languishing as an under-invested conference stop until a change of hands and a cash injection of a cool £6m catapulted the hotel this summer into more luxurious territory, complete with a brand new H Spa and contemporary dining restaurant. North Buckinghamshire is not well served for quality hotels so Horwood House’s rebrand and refurb has hit the right area at the right time.

However, the reception isn’t in the manor house itself, instead it’s accessed in the modern building to the right which feels a bit of a missed opportunity for early wowing. The reception entrance still smacks slightly of conference with its angular roof and broad pillars, but once inside, all is well with clean lines and Sixties-inspired styling.

There are several acres of elegant gardens to wander around (useless ‘garden’ fact while we’re being green-fingered: Percy Thrower was born here, as his dad was head gardener at the time). The ‘Secret Garden’ can be not-so-secretly found via the front of the property with its name on the door but it’s a fun conceit, and you can meander around high hedges, lily pond with water fountain and various shrubberies that link to the large paved courtyard seating at the rear of the house.

You don’t have to be a guest to dine and if you leave within an easy drive of Horwood House you’re in luck – the food on the day we visited was excellent. All dining is in the modern wing of the hotel, and we ate in Harry’s Kitchen and Bar, a large zoned eating area with a mix of banquette seating, individual tables and two huge fabulous leather sofas for coffees and papers in the day.

All locally sourced as you’d expect from a rural foodie area, I started with a burrata with homemade focaccia (£12), soft and creamy with hazelnut dressing and sage as the cut through. Inexplicably on a boiling summer’s evening, I chose a beef brisket with creamy mash, confit carrot, and crispy onion (£26) but I’ll let my stomach rule my head more often, because it was fabulous.

The beef, sourced from The Buckingham Butcher close by, was juicy, tender, and deliciously smoky. A pretty trifle was unnecessary but still dismantled by my friend and I. Also worth noting there was plenty of buzz in the restaurant for a week day evening. With a new menu just launched now for the autumn, it’s worth eating there, even if you’re not staying over. If you do rest your head to a pillow, you’ll find breakfast in 1911, a different restaurant space – another large retro-inspired interior, with a buffet and coffee that both hit the mark.

The best rooms are the three Manor Suites in the main manor house. Judging from the photos (the rooms were booked so unfortunately I couldn’t stick my beak in to look) they look sumptuous with separate living rooms, double kingsize beds and mullion windows and will set you back around £400 per night. Instead I stayed in an Executive Suite (from £220), with an all-mod cons bathroom (loving the floor tiles), decent-sized lounge area and small separate bedroom that could have done with a bit more walking space and a more stylish wardrobe but, on the flip side, I did have views out onto the courtyard. There are also Executive Suites with balconies that are a little larger and fit families, though of course in a hotel with 159 bedrooms, there are options to suit all budgets and requirements– double start at just £83. You can also stay in one of eight rooms in the old stable block, just to the right of the manor house – ideal for parties. There are also dog-friendly rooms are also available in case you can’t bear to be parted from your four-pawed pal.

A massive calling card for Horwood House, the discreet H Spa comes with 15m pool, sauna, steam room and spa lounge, six treatment rooms, a gym with integrated TVs and access onto a courtyard for drinks and afternoon tea (which was fab by the way). Guests staying overnight have access to the pool facilities and gym during their stay, with under 16 children’s swim times tailored to 9-10am and 4-7pm Monday to Sunday.

Though south Buckinghamshire is well served for posh spas (think The Langley and Stoke Park once it finally reopens) the north of the county is not quite so pampered so H Spa’s emergence is much welcomed. Whilst it doesn’t match the facilities at the elite five star spa hotels, there’s plenty to recommend here. Treatment rooms are elegant and pared back, and my a back, neck and shoulder with Express facial (£45) – was excellent. Afterwards, I curled up quietly with a glass of fizz in the chill out area, which I really loved as I pulled the floaty semi-opaque curtains for privacy and a quick twenty winks. There are loads of spa packages, from half days to sundowners, and overnighters too if you’re looking for a spa-and-stay in this neck of the woods – loving the sound of the Spa and Shop at Bicester Village which sounds like a no-brainer.

Plenty to do in the local area, with the likes of Bletchley Park, Waddesdon Manor, MK Gallery, Silverstone, and the beauty of Stowe Landscape Gardens and the privately owned Rousham Gardens all within 30 minutes. For shopping you’re close to both Bicester Village and centre: MK, and if you have the kids with you, there’s Willen Lake for watersports and Woburn Safari Park in around 20 minutes.

Good for: Girly breaks – the spa is attractive and good value. The quality of the dining is a massive plus. Weddings here would be gorgeous too.

Not for: Design mavens should eschew the modern block bedrooms and hallways and head straight for the manor house. If I’m being fussy (yes, of course I am) another £30k spent on more paintings and objet d’art will lift the interiors to true chi-chi territory.

The damage: I experienced the Rural Retreat Spa Break which is £220pp in a deluxe room. 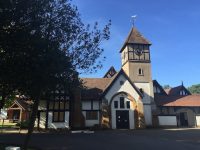