Fancy refreshing your bookshelves for spring? Here are the latest releases for all ages, from Muddy Award winners, Mostly Books, in Abingdon.

Our Wives Under The Sea by Julia Armfield

Julia’s short-story collection salt slow was released in 2019 to great acclaim, and so it was with immense excitement we received copies of her first full-length novel. As with salt slow, Our Wives Under The Sea has a gothic and mythic core running through it. A strange and spine-tingling wonder.

Kasim Ali, himself an editor when he’s not writing his own books, has burst onto the scene with this dazzling debut. Focusing on the relationship between Nur and Yasmina, Good Intentions deftly explores difficult subjects such as racial prejudice and religion, and how they play out within a relationship. Kasim is a brilliant writer, and we particularly love how well he portrays the relationships between family, friends and lovers.

Although already a successful journalist and writer, Sarah Vaughan’s first thriller Anatomy of a Scandal brought her brilliant writing to a new audience. Her fifth novel, Reputation, introduces us to Emma Webster, a Labour MP who is embroiled in a murder investigation and tried in the court of public opinion. Vaughan’s writing is razor-sharp and she is an expert in creating a story that just pulls you along. Read the first page and you’ll be hooked!

This is a beautiful book, a loose retelling of the life of the poet Charles Causley and his mother Laura. Gale’s writing is lyrical and always packs an emotional punch. This book will take you through two world wars, forbidden love, and the unbreakable bond between a mother and her son.

This is the final installment of the Orphans of the Tide trilogy, a true page-turner of a saga which will have you reading it too after the kids have gone to bed! A perfect end to the trilogy – we highly recommend this to any young fans of fantasy who enjoy getting lost in a new world.

A strange and romantic tale from the bestselling YA author. The story centres on Olivia, an orphaned and voiceless girl, who one day receives a letter summoning her to her uncle’s estate. When she arrives, she discovers he is dead. She is allowed to stay at the house, but why do the servants tell her to not cross the wall on the boundary of the grounds? They say on the other side is a magical realm, and Olivia feels it calling to her. Schwab has earned a fan base for good reason – no one spins a yarn quite like her!

We’re huge fans of Gold’s and illustrator Levi Pinfold’s previous collaboration The Last Bear – it left one of our booksellers in floods of tears (but in a good way she insists)! The Lost Whale is set to be another tender and gorgeously illustrated adventure about the connection between young Rio – a boy living with a grandmother he barely knows while his mum is in hospital – and White Beak, a gentle giant of the sea. When White Beak goes missing Rio must go on a quest to find his whale. A perfect read for young nature-lovers.

A super fun and colourful picture book about a group of animals all after the same ‘thing’. Mouse thinks it’s delicious fruit, frog thinks it’s the perfect new wheel for his bike. Now they’re all fighting over it. But what is the thing? And where did it come from? When the animals find out they will be in for a snap-snap surprise! A cheeky and mad-hap story sure to have your little ones giggling.

Bookworm?
The best indie bookshops in Bucks & Oxon
Books for bright sparks, from a leading school librarian
The best book releases in Feb 2022

The post 8 new books to get stuck into this month appeared first on Bucks & Oxon. 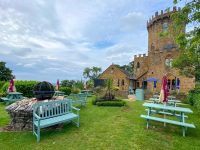